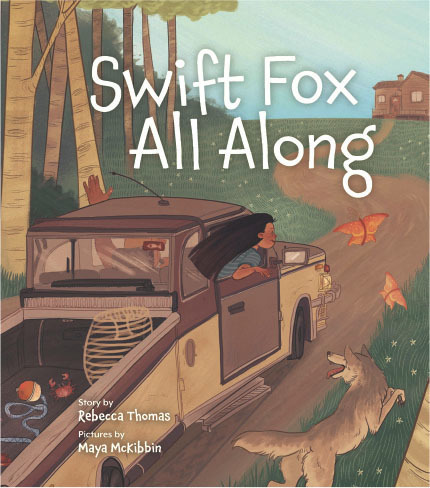 Picture books help children learn about their identity, navigate new situations, and embrace themselves through relatable characters who are facing new challenges. If someone is not represented in books, those lessons can be more difficult to internalize.

To expand these opportunities for Indigenous children, whose stories and unique challenges are underrepresented in picture books, Rebecca Thomas created Swift Fox All Along, the story of a young girl who meets her Mi’kmaw family for the first time after growing up offreserve. "Representation is crucial for young Indigenous people," Thomas says. "I never saw anyone who looked like me or had a similar experience growing up represented in books, movies, or TV."

Those of her books that did include Indigenous people often portrayed these characters as historical figures and as belonging to the past. "It was very difficult to feel connected to my identity when I didn’t see myself in stories," she says. "This book shows the modern and often complicated life of an Indigenous person in a way that validates so many Indigenous kids and that challenges non-Native people to shift how they think about who is considered ‘Native.’ "

Swift Fox All Along highlights the challenges of maintaining traditional culture when not living on the reserve. Swift Fox’s Mi’kmaq family welcomes her with open arms, but she gets shy and overwhelmed in this new place. When she finds a little space outside to be quiet in, she becomes curious about her environment, and its familiar sounds and smells draw her back inside to meet new people.

Thomas brings her own story to the book: when she was a child, her dad called her Swift Fox.

Thomas is l’nu of the Mi’kmaq Nation and grew up off-reserve in Riverview, New Brunswick, the traditional territory of the Wolastoqiyik. Her parents separated when she was young, and when her father visited, he would bring Indigenous items so he could pass along a bit of the Mi’kmaq identity. While he had lost the Nation’s language and some of its culture after attending the Shubenacadie Residential School, he prioritized passing the traditions he remembered on to his own children to connect them to their culture.

Illustrator Maya McKibbin created the engaging and lively drawings in the book. "I was very insistent that my illustrator be Indigenous," Thomas says. "I saw character sketches from other work that Maya had done and immediately knew she could bring Swift Fox and all her family to life. I was thrilled when Maya agreed to take the project."


"I wanted little kids to be able to point to the pictures and see themselves or people in their family even before they can read."


Through these drawings and stories, Mi’kmaq children can now see themselves in characters who share familiar experiences. Thomas also remains active in her Native identity. "I have been working with my community members, going to events and ceremonies, and reading, practicing, and staying humble," she says. "I am Mi’kmaw. I participate by living as a Mi’kmaw person."
Annick Press publishing in 2020 Rebecca Thomas Swift Fox All Along