BOOK REVIEW: Carry: A Memoir of Survival on Stolen Land 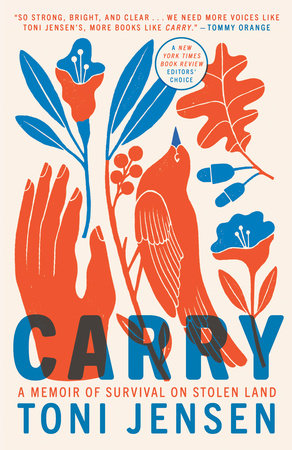 Carry: A Memoir of Survival on Stolen Land by Toni Jensen is a poetic and creative memoir about a present-day Métis woman’s life as she moves across the US for her academic pursuits. Jensen uncovers historical place-based revelations to show that these mundane places are not always what they seem, nor are they as simple as the words on a sign describe. In fact, these places carry a broken story that, if truly confronted by the visitors and inhabitants of these places, they would undoubtedly awaken to the historicaland continued violence across the US.

Jensen shows how people living in the same place do not all share the same story. She exposes how Indigenous stories have largely been erased in an effort to favor a more desirable story of American exceptionalism. She repeats the theme of uncovering the hidden and unspoken stories of violence against Indigenous peoples as she takes readers along her journey in academia, as both student and teacher, across several locations during her undergraduate and eventually her completed PhD studies, over years of travel for her studies and employment.Jensen’s constant connection to place-based violence is interpreted through her love forwords and language.

She references and grounds her understanding in language by noting Merriam-Webster’s Collegiate Dictionary throughout the text. Jensen defines the most seemingly trivial of words and phrases, only later to reveal the connections to a more complicated historical interpretation that helps to explain the present expressions of violence in society.

Jensen shows this historical messiness in the over-simplification of a place by pulling multiple stories together to tell the history and story of a place.

The complicated and parallel histories of place tied together through violence is part of Jensen’s mission while telling her family and personal story, though with less focus on the family. While some family details are shared, this is not central to her memoir.

Instead, it is her pursuits in academia that bring the reader to most locations. At one point, Jensen locates herself at the University of Arkansas and describes a slew of interwoven events ranging from the legal right for people to carry a handgun on campus to an overall critique of the American campus as having inherent contributions to the stolen land of Indigenous peoples.  Jensen revisits many institutions of higher education which formed her academic career, with the point of showcasing their complicities in the land grab.

As she jumps from location to location in each chapter, Jensen seeks to understand thechaos of local violence that usually manifests in omnipresent awareness.

These perceptions of violence range from the quietly maintained violent tendencies withinindividuals to the ghastly obsession with maintaining intimacy with violence. One suchexample is in the form of a placard on the door notifying motel guests they are sleepingin the exact room Timothy McVeigh stayed in while in Kingman, Arizona. Of course,Jensen knows Timothy McVeigh’s notoriety and involvement in what is often referred toas the worst domestic act of terrorism in US history. Yet she easily finds examples, suchas the Greenwood Massacre and the 8,700-17,000 Indigenous peoples who died duringthe Removal Era, as comparable acts of domestic terrorism in the same place now calledOklahoma.

The hypocrisy of memorializing violence is revealed with McVeigh’s name appearing like a miniature Hollywood Walk of Fame with gold stars surrounding the placard outside the motel room that Jensen finds herself in at one point.

Her cross-country travels present new opportunities for making sense of the local historical violence that has occurred. These historical references to violence also serve as a warning of continued, unexpected violence at the same place due to historical amnesia. She does this as she pursues teaching as a career and eventually earns a PhD while periodically referencing her family, friends, and children who make up her personal world and upbringing. Her cross-country academic pursuits make it hard to feel grounded in the story, given the quick tendency to pack-up and move on very soon.

Jensen engages the misleading simplicity of US violence through her love of language.She details the passive language that exists within the official records on the Indian Removal Act, which indicate Indigenous peoples “were removed” from their homelands.

She notes that the passive phrasing of “were removed” gives no semblance of coercion or violent action from soldiers’ bayonets or the presence of thousands of armed US soldiers (59). Violence seems inherent to most interactions across her cross-country experience. At times, the thread to violence is rooted in land, those who exploit it for economic gain and those who have Indigenous ties to it.

Her memoir is less of an Indigenous-centered storytelling and more of a person observing layered violence within their local communities while also being of Indigenous ancestry; this third point allows for a more nuanced consideration of how violence is embedded within places. She avoids a linear timeline and allows each of the 15 chapters to transport the reader to a new time and place, avoiding a sequential order altogether. Instead, place and relevant historical violence to that particular place are the focus of each chapter.

Jensen covers many types of violence, including domestic violence, dating violence, gunviolence, campus violence, colonial violence, and domestic terrorism, all while revealingthe American hypocrisy of simplistic understandings to violence.  For example, the overlysimplistic US interpretations of race classify her as white, while her nephew is read asBlack, when neither of them are just that.  She is keenly aware of the ongoing erasure oftheir Indigenous identities occurring simultaneously with a phenotypical understandingof them both as either white or Black, which is another act of violence.

She maintains the pulse of present-day violence with current references to COVID-19 and George Floyd’s murder through the media and the public’s obsession with mass shootings and our subsequent comfort with them (257).  Jensen seeks to disrupt this comfort through sense-making and local ties that explain the inherent violence of life in the US.

The intended audience would be interested in making sense of the fundamental presence of violence across the US through the life story of a Métis woman who possesses a knack for drawing out meaning in the mundane normalcy and regularity of US violence. This is a quick read with references to violence that leave a reader to contemplate their own relationship to local violence in a more nuanced way.