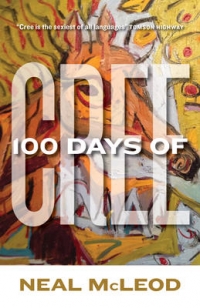 Make this holiday special with Indigenous books and GIFTS!

WHERE TO SHOP? Strong Nations online

As an Elder once said, "Learn one Cree word a day for 100 days, and emerge a different person."

In 100 Days of Cree, Neal McLeod offers us a portal into another way of understanding the universe--and our place within it--while demonstrating why this funny, vibrant, and sometimes salacious language is "the sexiest of them all" (according to Tomson Highway).

Based on a series of Facebook posts, the 100 short chapters or "days" in the book present a chain of related words, some dealing with the traditional--the buffalo hunt, the seasons--and others cheekily capturing the detritus of modern life--from Internet slang to Johnny Cash songs to Viagra.

The result is both an introduction to the most widely spoken Indigenous language in Canada and the opportunity to see the world, and ourselves, in another way.

Reviews
"The nonfiction book is divided into 100 themes and offers Cree words and English explanations for everything from traditional subjects such as powwows and medicine to modern subjects such as Facebook and Star Wars. It also includes a guide to pronunciation written by Arok Wolvengrey, a linguist and the author of a Cree-English dictionary. 'When we think about indigenous languages, there’s a part of us that thinks they’re dying languages, ' URP publisher Bruce Walsh said. 'And then this manuscript comes in that demonstrates a living, vital language.' McLeod said that he and Wolvengrey worked to keep a balance between traditional usage and modern adaptations. 'To revitalize our languages, we have to do two things: we have to document the classical terminology, because within that terminology are all of our metaphors and idioms; but we also have to think of how to put old words together, to coin words, to describe the contemporary world.'"